I have an experience to share that has been creating synchronicity with me as of late.

On the eve of this years Summer solstice, I had an experience that took place when I was on a the border of sleep. I drifted off within minutes of laying down. Almost immediately, I was told by a voice that I know was my Higher Self, to stay in "the state of love". At which point, I was taken to the "void". I was surrounded by absolute nothingness. This was the only way I could describe it, it was as if I was being "reset" or sent back to, square one, if you will. It was tremendous to be so alone in nothingness.

And yet, within the background of somewhere or everywhere was a tremendous sound of blasting trumpet like sounds. Theses were very primordial type sounds that blared. And I must admit, that this sound blaring within the "void" of nothingness was a little intimidating.

Then without any warning another wave of darkness came to surround me. I thought initially that I was in a "void" and now, this darkness seemed to be an order of magnitude greater than the first "void," if that is possible. And when this second way of extreme darkness passed through me, I realized that I was still on a "ground" standing within the "void," initially. Because when this second wave passed, it was as if gravity was no longer existing. So, I was "floating" through the void. Which mattered not, as I couldn't tell if I was moving, at all. I could have been spinning and wouldn't have known. As in the void there is no point of reference.

I tried to focus on love while this was happening as I was instructed to do so. I have always recognized the trinity as a sign of completion of some sorts. So, I wanted to stay until I heard the blares from the trumpet sound three times. But, I was only able to stay through two of these blares. At which point, I felt a little intimidated and left, or was shot out rather quickly.
At once, I was back and I was suddenly wide-awake. I was amazed at how little time had passed. I felt, so completely in this other reality that was the "void".

Transitioning to Higher Dimensions Through Releasing All We Are Not

Shortly there-after, I started hearing reports of going through a "reset" of sorts starting around July, or I believe around the summer solstice. I have heard that many are experiencing within their lives some sort of reset or closure in their own unique significant "issues" that they are working through.

The edict has been issued and accomplished. We are moving into, yet further, higher frequency energies that are bringing up "that which does not serve us" to be transmuted and transcended. And as much as we dread having to revisit an issue that seems a "sore spot," in our persona; we really are facing these "issues" from a deeper and higher perspective.

Not to mention the fact that we are increasing in frequency very quickly. This means that we are getting even more sensitized, towards any discordant frequencies that enter our realm. We are really tuning into higher intuitive abilities.

So, what may seem as a repeat of an "issue" that has come back, is not just that. A deeper level of the same "issue" is coming forward and since we are more sensitized we are transmuting and transcending these "issues" from a higher level.

And as the solar eclipse happens next month, we will be bringing forth even more of what we need to reflect on and forgive/release. All solar eclipses are a sign of going within to work on what we have been neglecting. This is going to happen to all of us. We are releasing more that is not our truth.


Divine Sound and the Reset

As we go through our own unique releasing of all that does not serve, we are purifying all sound that is within our realm. We are transmuting and transcending all the discordant Creations that we have allowed to influence us. And as we do this we purify the primordial sound that is ours by Divine right. And when we redeem our use of sound, our ability to use the higher and Divine functions of pure primordial sound will bring marvelous Creations into being. Masters of all energies, consciousness, thought, feelings, emotions, actions, spoken and visualizations is our goal.

The Portal to Higher Realms is Opened and Gaia is transcending through the portal, along with all of us. We are all going through the transitions that we so desired.

Masters in the making are all of my beloved brothers and sisters.

Popular posts from this blog

Thanksgiving (As above, So below)

We are told by the Ascended Host that we bring into our reality, seeds and actions that occur from our visits to the Ascended realm. And that they had originally instituted a day of thanksgiving for their joy of service with/for us.

And as we are ever guided by these Divine loving beings, we “picked-up” this holiday from their energy, as well as our participation in it, and carried it forth into our reality. Much like we bring forth many of their teachings from their realm, we also bring forth energetic frequencies as well as experiences; that are existing in the Ascended realms.

The paradox, is the inability for us to “recall” these happenings/occurrences. As we have been taught since childhood that these realms known as “dreams” and “imaginations” are “fictitious.”  And in truth, these realms we dismiss rather lightly; are in fact as “real,” if not more “real,” than our everyday “waking” state.

The Time for Looking Without Is Coming to a Close! 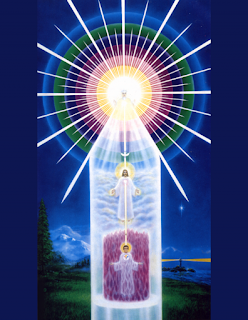 The time for looking without is coming to a close. For in reality, if we look without we are buying an illusion that was not constructed by us. Those that have been influenced by those in power, i.e. the PTB (powers that be), have been working with these PTB’s to limit our knowledge and our abilities.
As the truth is that we are truly unlimited powerful beings of divine origin.

However, in order to keep our inherent abilities, we must use these. We must take our power and through use, feed it and grow it with love, peace and harmony. We must be sincere in our self-reflections. Never being harsh with ourselves, rather being kind and understanding to ourselves and our transition that we are succeeding in.
In today’s time, we must realize that we are creating more and more. As we graduate to creating more of our reality conscientiously, we realize that the truth of what we all desire is a reality that is filled with harmony, peace and divine love.
If this resonates with us, then the best…
Read more now»

Our experience has been ongoing for some time in the 3rd density. And we have fairly recently progressed into the 4th density. And as this is our “new” reality, we are excited to be entering this new environment, once more. As we have all been here before, however, most of us, have little to no recall of this; as of now. So, what have we gotten ourselves into?

If we take a look at the “densities” that we go through, we see that they each have their own unique “theme” for us to grow through and from. And while in the 3rd density, “courage” was the over-all theme. The new theme for the 4th density is… Love. And then we integrate wisdom into love in the 5th density.

So, from 3rd to 5th density, we have a trinity of “over-all” learning. We have courage, love and wisdom. Although, we go through learning much more than these over-all lessons. As we each take on learning through the various virtues of the Divine, which have been divided into seven, in our reality. Yet, these “over-all” theme…
Read more now»

Divinity In Us - by Gabriel Duran
Albuquerque, NM, United States
In 2007, I had what I would believe to be my spiritual awakening for this lifetime. I was not exactly the happy camper when I was awakened. I was actually quite upset, feeling that I was living a lie, before my awakening. Since then, I have spent the past 10 years on a spiritual quest. I have studied much from all sorts of “Divine” sources. And I feel it is my privilege to be in a position to share my findings on my quest. Please take what resonates with you and leave what does not. And if I could influence one thing in your life, it would be that “You Are Already Divine, Within.” Please allow that to manifest, and the world will be all the greater for you will be fulfilling your Divine Plan.